A Brief History of Sheffield Village:

Sheffield Village is rich in human history that began several thousand years ago with Native American Indian occupation along the beach ridge of an ancient glacial lake (North Ridge) and at the confluence of streams tributary to the Black River.

Archaeological evidence indicates that several Native American cultures established settlements in Sheffield over the ages, but by the mid-1600s few were left in northeastern Ohio.

Soon after the War of 1812, hearty pioneers from New England began to recognize the natural attributes of northern Ohio. In January 1815, Captain Jabez Burrell and Captain John Day of Sheffield, Massachusetts purchased a large tract of land designated as Township 7 of Range 17 in the Connecticut Western Reserve. They formed a partnership with several other Massachusetts families and later that year and the following spring settlers began to arrive in the valley of the Black River at the mouth of French Creek where they founded a community called Sheffield in honor of their former home.

Living up to a provision in the purchase agreement, in 1817 Captains Burrell and Day erected the township’s first saw and grist mills along Black River about one-half-mile upstream from the mouth of French Creek. The settlers also built a schoolhouse and a Congregational Church. When Lorain County was formed in 1824, the population of Sheffield included 44 adult males and their families. The first action of the new County Commissioners was to officially establish the Sheffield as a Township and formally adopt the name Sheffield.

In 1836, Oberlin College established the Sheffield Manual Labor Institute on the Burrell Homestead in Sheffield, where for the first time in the nation. Women and African-American students were permitted to attend college classes alongside white male students. Then, another major wave of settlers came to Sheffield in the 1840s and 1850s when immigrants from Bavaria, Germany arrived and eventually built St. Teresa of Avila Catholic Church. Prior to the Civil War several Sheffield residents, such as Robbins Burrell and Milton Garfield, were active abolitionists and operated stations on the Underground Railroad. Captain Aaron Root, a Great Lakes shipmaster from Sheffield, secretly carried runaway slaves aboard his vessels to freedom in Canada. During the Civil War many of Sheffield’s sons served in Union Army and Navy—23 of them are buried in the Village’s Garfield Cemetery on North Ridge.

Sheffield continued as primarily a farming community in the late 1800s, producing 85,000 bushels of corn, oats, wheat, and barley and 30,500 pounds of butter, cheese, and maple sugar in 1878. A dramatic change took place in 1894 when the City of Lorain annexed a large portion of the northwestern part of Sheffield Township and the Johnson Steel Company (later the National Tube Company of US Steel Corporation) built a large mill and housing development there, known as South Lorain, on the west side of the Black River. By 1906 several steam and electric railroads had been built through Sheffield to service the steel mill and provide commuter passenger service.

In 1920 Township residents living east of the Black River voted to withdraw from Sheffield Township and form the incorporated Village of Sheffield Lake. In 1923, the new Village constructed Brookside School (which was partially damaged by the Tornado that devastated Lorain in June 1924) to replace several Township schools that were built in the 1870s and 1880s. Brookside graduated its first senior class in 1930. By the early 1930s the new Village was experiencing internal problems—because the south end of the Village had a sparse population with large farms, while the north end had a greater population living on small lots, the residents of these two segments found their interests to be incompatible. In 1933, the farmers in the south end voted almost unanimously to separate from Sheffield Lake Village. 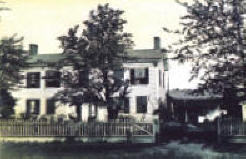 Because the new Village of Sheffield had no public buildings when it was formed in January 1934, Mayor McAllister convened the first meeting of the Village Council in his home. In December 1934 the Village purchased the North Ridge District No. 2 Schoolhouse from the Sheffield Township School District for $500. This elegant Queen Anne-style red brick schoolhouse, built in 1883 adjacent to Garfield Cemetery, was no longer needed by the School Board with the opening of Brookside School several years earlier. In 1935 the building was converted to the Sheffield Village Hall and served that purpose for the next 65 years.

In the 1940s and 1950s Sheffield’s North Ridge became known as The Greenhouse Tomato Capital of America, as 24 acres of land were covered with glass. In 1957 a new fire station was built adjacent to James Day Park on a bluff overlooking French Creek. In 1999 this building was enlarged and now serves as Sheffield Village’s Municipal Complex.  In the 1960s the Lorain County Metro Parks began preserving natural areas along the Black River and French Creek, which now includes a Nature Center and many miles of paved and earthen trails within Sheffield Village—the latest being the Steel Mill Trail, opened in May 2008, with high bridges over the Black River and French Creek. Today Sheffield is in a period of 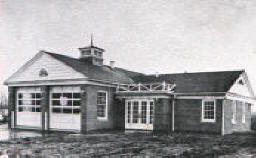 transition, as farmlands are being diminished and the Village became a modern residential and commercial center. The Sheffield Village Historical Society was formed in 2005 to preserve the heritage of those who toiled to found the Village and who found joy in their accomplishments.